Thank you to everyone who joined us to stand against extractivism.

On Wednesday 9th October, we gathered outside the Department for Business, Energy & Industrial Strategy (BEIS) in London to call out Drax Power station and the impacts it’s having on forests, communities and the climate. We stood together in calling on the government to scrap subsidies for biomass and refuse any subsidies for Drax’s gas and coal burning. 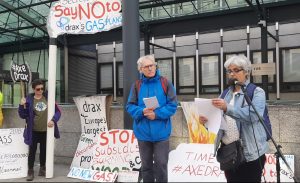 Kerima Mohideen and Richard Solly from the London Mining Network, reading stories from those affected by Drax’s coal imports. 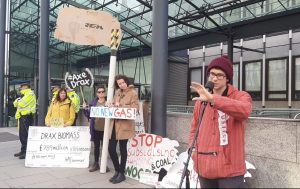 Ben from XR Liverpool, speaking about Peel Ports, where Drax’s woody biomass arrives from the US.

We heard from a range of speakers – coal, gas and biomass campaigners, climate strikers and the Environmental Justice Bloc of Extinction Rebellion. Stories were heard from those most affected by Drax’s burning, from the South eastern US (the main sourcing region for Drax’s woody biomass) to the Russian Kuzbass region, where entire villages have been destroyed and poisoned from coal mining. We even had a message of support sent to us from Bill McKibben!

Following the speeches we enjoyed a participatory performance from Peter Deane on guitar, and some great rhythms from one of Extinction Rebellion’s Samba bands. Several of us then headed to Drax’s Office in the City of London for a final demonstration.

The protest also came a few days after the UK Government approved Drax’s plans to build the UK’s biggest gas power capacity, despite a recommendation from the planning inspector to refuse the project on climate change grounds.

It was important to centre the voices of those most affected by Drax’s burning, so we owe a particular thanks to those from the Southeastern US who sent us their voice testimonies to be played at the protest.  You can hear James Woodley’s testimony on the community impacts of Enviva’s wood pellet production here. If you want to read more about the impacts of coal mining in Russia, the report, ‘Slow Death in Siberia’, has several testimonies from the Shorr People of the Kuzbass region. 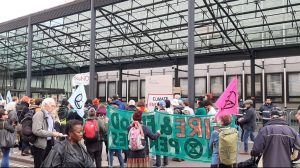 Passers by are given fliers on Drax and the impacts its having on forests, communities and the climate. 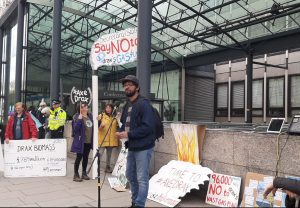 Aarjan from the Environmental Justice Bloc speaks about the importance of centreing voices on the frontlines.

Drax is representative of a centralised energy model and a wider extractivist system that pushes up energy bills for the poorest, rips control from communities, and values forest destruction over forest protection. For forests, communities and the climate, Drax has to go.

Thank you to all the speakers, helpers and fellow protesters who joined us! A collection of videos from the speakers and performers can be viewed here. 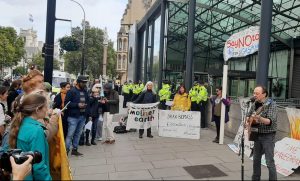 Pete from Biofuelwatch performs George Perkins “Crying in The Streets”, updated for the climate crisis. 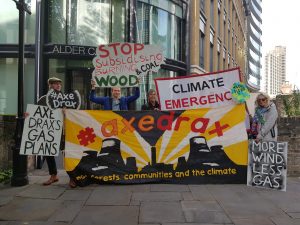 Finishing off at the Drax offices in the City of London.