The International Air Transport Association has published a web page with the title “Countering Misinformation on Sustainable Aviation Fuels“. It is a critique of Biofuelwatch’s briefing about the Carbon Offsetting and Reduction Scheme for International Aviation (CORSIA).

Here we wish to show that, far from identifying “misinformation” in our briefing, IATA’s statement contains seriously misleading claims:

IATA is wrong to say that CORSIA “offers the prospect of…reducing some 2.5 biollion tonnes of CO2 between now and 2035“. The purpose of CORSIA is not to reduce CO2 emissions from current levels. It is solely to help stabilise them at the level they will be by the end of 2020 (although, as our briefing shows, claims that CORSIA can achieve even that are highly problematic).

hich mainly means aviation biofuels). If this was the case, then ICAO would not, for example, have developed “CORSIA Sustainability Criteria for CORSIA Eligible Fuels“

IATA is wrong to say “CORSIA makes it extremely difficult for palm oil to qualify for recognition”. ICAO’s leaflet ‘CORSIA Eligible Fuels’ explicitly refers to palm oil and Palm Fatty Acid Distillate (which is a fraction of Crude Palm 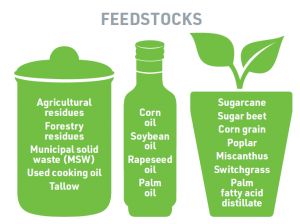 Oil) as being eligible. So far, ICAO has published one of two documents about the proposed methodology for calculating ‘carbon savings’ from biofuels. According to this document:

+ Crude Palm Oil can qualify as an eligible fuel as long as it is produced in palm mills with methane capture and does not result in significantdirect and use change emissions. Methane capture from palm mills is increasingly widespread. This is despite the fact that a study commissioned by the European Commission shows that indirect land use change emissions make palm oil biofuels three times as bad as the fossil fuels they replace.

+ Palm Fatty Acid Distillate is classified as having no indirect land use change impacts at all – even though an independent study of indirect greenhouse gas emissions from PFAD biofuels show that those are only slightly below ones for Crude Palm Oil. This is not surprising because PFAD is a fraction of Crude Palm Oil, one which is already in heavy demand by other users.

IATA further states that all “Sustainable Aviation Fuel being produced is certified by either the Roundtable for Sustainable Biofuels (RSB) or the International Sustainability and Carbon Certification scheme“. IATA fails to point out that other certification schemes could be added to the list in future. In any case, the International Sustainable and Carbon Certification (ISCC) scheme certifies biofuels (including Hydrotreated Vegetable Oil, the type of biofuel suitable for aviation) which contain both Crude Palm Oil and PFAD).

IATA is wrong to say: “Aviation has no intention to use palm oil”.Three Malaysian Airlines have signed up to a “Love MY Palm Oil” campaign, and a Malaysian Minster has said that the government was planning to produce biofuels from palm oil for the aviation industry. IATA is also wrong to say that Neste, who plan to become the world’s biggest aviation biofuel producer, won’t be using palm oil for that. Neste misleading classes as PFAD as ‘wastes and residues’ and refuses to disclose the proportion of ‘wastes and residues’ which are made up by this type of palm oil. Furthermore, Neste has only publicly said that it is not currently using Crude Palm Oil for aviation – not that it rules out doing so in future.