x
by Almuth
on October 4, 2019
under News, Press Releases
∞ Permalink 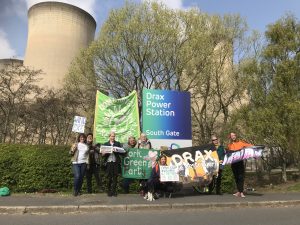 London, 4th October 2019 – Today’s decision by the Secretary of State for  Business, Energy and Industrial Strategy [1] to allow Drax Plc’s planning application for the UK’s largest ever gas-fired power capacity will lock the UK into dirty energy production for at least another two decades, climate campaigners have said.

Drax Power Station is already the world’s biggest biomass plant, burning over 7 million tonnes of imported wood pellets, many of them sourced from the clearcutting of forests that lie at the heart of a global biodiversity hotspot in the southern USA. [2]  Drax now wants to replace its remaining two coal-fired units with far larger gas units. This will be the UK’s largest gas power capacity to date. For this project, Drax is asking for substantial new subsidies,[3] in addition to the £2.16 million a day it already receives for burning wood. [4]

In April this year campaigners handed in a petition of over 96,000 signatures and an open letter signed by 92 organisations internationally to the then Secretary of State for BEIS, Greg Clark, asking him to reject Drax’s proposal.[5]

“We are disappointed by the Secretary of State’s decision. Drax already burns more wood than any other power station in the world, and now it will return to its former position as the UK’s largest fossil fuel burner, too. The public money Drax will require for this project needs to be spent on renewable power from wind, waves or sun.”

“The Government has shown that it listens more to dirty polluting energy companies than the communities it claims to represent. Thousands of people have said that they do not want new gas infrastructure, including by taking to the streets and taking direct action at power stations. Today’s decision has no social license.”

Mark Knowles from a regional Green Party branch- who initiated the petition against the project – adds:

“This is a step in the wrong direction on climate change. If the government was serious about meeting its commitments under the Paris Climate Agreement and staying within 1.5 degrees of global warming, it would have rejected Drax’s application.”

Activists plan to hold a demonstration outside the Department for BEIS next week to highlight Drax’s contributions to environmental injustice through biomass, coal and gas.[6]

[3] Drax’s Annual Report states that the company is seeking Capacity Market Payments for the gas units.