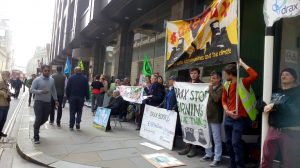 London, 17th April – Climate justice campaigners held a colourful and musical protest outside Drax Plc’s Annual General Meeting in London earlier today, denouncing the company’s power station as the UK’s single biggest emitter of CO2, and exposing the disastrous impacts of its biomass, coal and gas burning on climate, forests and communities.[1] Protesters gathered with percussion instruments, banners, placards, pictures of animals whose habitat is at risk from the biomass industry, and a large cardboard smokestack. Some of the protesters have gone on to the government department responsible for the £2.2 million in subsidies received by Drax every single day, demanding that those be redirected towards low-carbon renewable energy such as wind, wave and solar power.

Drax power station burns more wood every year than any other plant in the world, and more than the UK produces annually. Part of the wood burned by Drax comes from the clearcutting of carbon rich forests that lie at the heart of a global biodiversity hotspot in the US. In addition, Drax burned 2 million tonnes of coal last year. The company now wants to replace its remaining coal units – slated for closure in 2025 under the government’s coal phaseout – with the UK’s largest ever gas-fired power capacity. This plan has been condemned by 92 environmental organisations and 96,000 individuals, with a petition and Open Letter handed to the Secretary of State earlier this month. [2]

Duncan Law from Biofuelwatch said: “Right now, our allies in the southern US are campaigning against what would be the world’s biggest pellet plant, planned by Drax’s supplier Enviva in Mississippi. Enviva’s pellet business drives forest destruction, climate change and social injustice across large areas of the southern US already. Drax must be shut down and replaced with genuinely renewable energy from wind, sun and waves, and the UK government needs to stop subsidising this dangerous false solution to climate change.” [3]

Isobel Tarr from the Coal Action Network added: “Drax sources coal from Siberia, where indigenous people are suffering the health impacts of open cast coal on their doorstep, and those who speak out against it are at risk of human rights abuses. [6] The UK government has said it will phase out coal fired power by 2025; we need a phaseout sooner than this, an end to opencast mining in the UK and a just transition for power industry workers.”

Ash Hewitson from Reclaim the Power stated: “Drax wants to build the UK’s largest gas fired power station to date, which will make us more reliant on fracked and imported gas. The projected coal phaseout could be an opportunity for the UK to move beyond burning towards a more decentralised and democratic energy system and culture. Drax is obstructing progress towards this and taking us further from a safer energy future.”

1. See biofuelwatch.org.uk/wp-content/uploads/AxeDrax-briefing-2019.pdf for a referenced background briefing about Drax.

3. See dogwoodalliance.org/2019/03/gearing-up-for-a-big-fight-in-mississippi/ for details about the campaign against Enviva’s proposed pellet plant in Mississippi.