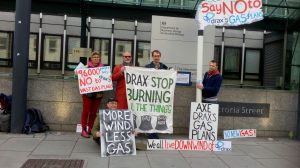 London, 4th April 2019 – A petition of over 96,000 signatures [1] was handed to the Office of Secretary of State for Business, Energy and Industrial Strategy (BEIS), Greg Clark this morning, accompanied by an Open Letter [2] signed by 92 organisations – and by a cardboard model of Drax Power Station’s chimney spewing CO2 into the atmosphere. The petition and letter urge him to refuse planning permission for Drax Plc’s plans [3] for the UK’s largest ever gas power capacity to replace its coal units slated for closure by 2025, under the Government’s coal phaseout policy.

Drax is already the U.K.’s single largest emitter of carbon dioxide, burning more wood than any other power station in the world, as well as continuing to burn coal. With the UK government planning a coal phase-out by 2025, Drax now wants to build the country’s largest ever gas power units and is asking for substantial new subsidies, [4] in addition to the £2.16 million a day it already receives for burning wood. [5]

Drax admits in its planning application that the gas units would increase the power station’s CO2 emissions. [8] As the Petition and Open Letter point out, this would take the UK further from contributing to the aim of the Paris Climate Agreement to keep global warming to within 1.5oC.

Duncan Law from Biofuelwatch stated: “The UK does not need this gas capacity even according to government projections. Drax are very good at extracting subsidies and if they get planning permission will be burning gas until 2047. This will cross-subsidise the continued burning of climate damaging biomass long into the future. Drax’s vast gas plans must not go ahead.”

Ash Hewitson, from national campaign group Reclaim the Power, said: “We don’t need this dirty infrastructure, which will increase demand for imported and fracked gas and take us further away from meeting our obligations under the Paris climate treaty to stay within 1.5 degrees of global warming. Drax has no social license to continue burning fossil fuels for the next 30 years. We urgently need to reduce our energy demand and switch to genuinely low-carbon renewables.”

Mark Knowles from the York Green Party, who started the petition on Change.org added: “Fossil fuel reliance is a major factor accelerating climate change, and we need to reduce it right now. Meanwhile the UK Government throws millions in subsidies to burn biomass, subsidises gas burning and extraction, and promotes fracking. Here in Yorkshire we have a coal mining heritage, but we need a green energy revolution to power our future. Large scale domestic investment in renewable energy, energy storage and energy efficiency is vital not only to our collective future but would also provide hundreds of thousands of jobs in the UK at a time of economic uncertainty as well as private and public sector cut-backs.”

[5] The largest gas power station in the UK is West Burton Power Station, with a capacity of 1,305 MW. Drax’s new gas units would have a capacity of up to 3,600 MW.

[6] Drax’s Annual Report states that the company is seeking Capacity Market Payments for the gas units.