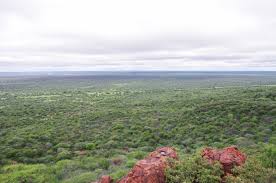 And click here to read an open letter by 40 civil society organisations opposed to this project.

An related article on a German NGO website about German climate finance can be found here.

In 2013, the German Ministry for Economic Cooperation and Development (BMZ) started funding a project in Namibia to help limit bush encroachment, i.e., shrubs and trees spreading across previously open savannah, and to help the country find ways to best use the wood that is removed. However, in 201 9, the German Development Corporation (GIZ) which manages the project, started to increasingly focus on creating a large new supply chain of woodchips or pellets to be exported to Europe, especially to Germany. Following a GIZ-funded visit by a Namibian delegation to a German biomass energy conference, a specific proposal for a “Transcontinental Biomass Partnership Namibia-Hamburg” was drawn up. This proposal, led by GIZ and the Institute for Applied Material Flow Management at the University of Trier (IfaS), is currently being assessed under the auspices of the Senate in Hamburg.

In October 2020, 19 mostly German NGOs and campaign groups, together with EarthLife Namibia, issued a public statement against the import of Namibian bushwood for use in power and heat plants in Hamburg. In February 2021, 40 environmental, development and social justice organisations sent an Open letter to Germany’s Federal Minister for Economic Cooperation and Development (BMZ), Dr Gerd Müller, urging him to set up an in-depth investigation of the project, and to establish to what extent there were contraventions of standards for good practice and of the do-no-harm principle. Separately, the Namibian civil society organisation Economic and Social Justice Trust has issued a statement rejecting the proposal for large-scale biomass exports from Namibia to Germany.

Namibia’s bush encroachment, which affects over 30 million hectares of land, is part of a much wider trend that has been described as “global dryland greening”, observed in every continent except Antarctica. In some regions, such as South Africa, invasive non-native trees and shrubs, often ones originating in industrial tree plantations, are encroaching upon grasslands. This contributes to the loss of biodiversity, to freshwater depletion and to the loss of communities’ livelihoods. However, in Namibia and many other regions, bush encroachment involves native species, and this is the focus of Biofuelwatch’s report. Many different factors correlate with bush encroachment, including overgrazing by cattle. Nonetheless, global scientific analysis points towards a common trend: as CO2 levels rise, woody vegetation gains an advantage over grasses, provided that rainfall is sufficient to support the growth of trees and shrubs. Bush encroachment significantly increases carbon sequestration in vegetation and, in most cases, in soils, i.e. , it mitigates climate change.

The Strategic Environmental Impact Assessment for the wider debushing project acknowledges this fact. However, GIZ then commissioned another more recent study from UNIQUE, which purports to show that large-scale removal of bushwood could, if done right, result in greater soil carbon sequestration, to such an extent that it would more than offset the loss of carbon in the woody vegetation that is removed. A separate literature analysis by Biofuelwatch shows that UNIQUE’s claims are not backed up by the majority of the literature cited in their own report and that they misrepresent the findings of a number of scientific studies cited. Biofuelwatch considers the study to be so deeply flawed that it should be withdrawn. Furthermore, the GIZ choice to commission analyses from UNIQUE in the first place is altogether inappropriate given UNIQUE’s “management” role in Paraguay-based forestry and tree plantation business operations on behalf of a company which a European Commission report has linked to human rights violations and environmental harm.

I faS, another main proponent of the German-Namibian biomass project, recently undertook to prepare a “roadmap” for large-scale debushing in Namibia to supply biomass to energy companies in Germany and potentially elsewhere in Europe. This feasibility study also bears the GIZ logo, suggesting that it may have been at least partly funded through BMZ finance. The IfaS study uncritically accepts UNIQUE GmbH’s report and findings, and, furthermore, it emphasises the potential economic benefits of the project to Germany, speaking of a win-win scenario for both countries – a dubious way of assessing the impacts of a project funded through development and climate finance. Of particular concern is a highly insensitive and offensive statement in the report that the project could ‘heal’ the ‘historical harm’ caused by Germany – i.e. , the impacts of the genocide perpetrated by Germany during its colonial rule over Namibia in the early 20th century. [Update, 24th March 2021: Following criticism from NGOs, a new version of the IfaS statement omitting this statement was published.] A question not answered by proponents of the bushwood exports is who in Namibia would benefit from this project. Bush encroachment reduces the number of livestock, mostly cattle, that can be grazed on land, a problem for those involved in extensive cattle ranching which accounts for the majority of the country’s agricultural earnings. However, Namibia’s land ownership is highly unequal, with 70.1% of commercial farms owned by members of the white minority which accounts for 6% of the population. More than half of the population live on a smaller portion of land classified as ‘communal’, many of them combining small-scale livestock grazing with growing arable crops and vegetables. There is a serious risk that the project could primarily or solely benefit larger commercial farmers and thus worsen existing inequalities.

Finally, claims about socioeconomic benefits to people in Namibia from the project are highly questionable. The economics of energy production in Germany would require keeping the cost of biomass supply low and competitive with other options. This suggests that the harvest of bushwould be done mechanically in order to minimise labour costs. Wholesale mechanisation of bush removal could displace existing bush harvesting jobs. Furthermore, Namibia has been a net importer of wood and wood products in most recent years and could benefit economically from using bushwood to meet needs within the country.

Given the serious problems identified above, Biofuelwatch believes that the BMZ-funded project Bush Control and Biomass Utilisation in Namibia should be immediately suspended pending a full investigation into the concerns raised and that the reports by UNIQUE GmbH and IfaS must be withdrawn and that BMZ and GIZ should reconsider their use of UNIQUE GmbH as a consultancy. Removal of encroacher bush cannot be regarded or treated as a form of climate change mitigation, because it significantly reduces carbon sequestration if implemented on a large scale. There is a case for the German government to support climate adaptation projects with an element of bush thinning, however, such projects must be developed in close collaboration with local communities, especially marginalised and vulnerable communities.