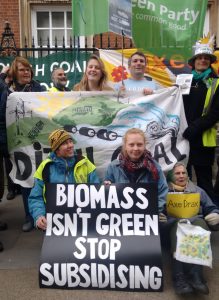 London, 29th May 2020 – Today, hundreds of environmental campaigners are calling on the UK Government to take urgent climate action by ensuring that future renewable subsidies are not used to fund burning trees in UK power stations. Over 800 individuals [1] as well as 20 environmental campaign organisations [2] have submitted critical comments to the consultation [3], which sets out proposals on how to award future renewable electricity subsidies, called Contracts for Difference (CfDs).

The NGOs and individual respondents to the consultation have called on the Government to ensure that safeguards vital for meeting climate commitments are reaffirmed, ones which would prevent new subsidies for large biomass plants reliant on imported wood from trees. They have urged the Government to protect forest ecosystems and the climate by ensuring that all future renewable power subsidies go to the cleanest forms of renewable energy, such as wind and solar power, rather than to more wood-burning power stations.

In 2018, the government announced new greenhouse gas and efficiency standards for CfD awards, which resulted in virtually all renewable power subsidies awarded since then going to lower carbon offshore wind and not to polluting biomass plants that emit at least as much CO2 as coal plants per unit of energy. They stated that failure to apply those changes “would lead to greenhouse gas emissions significantly above the projected UK grid average for most of the lifetime of [biomass] CfD projects”.[4] The government’s proposal for future CfD awards, which they have just consulted on, makes no mention of extending those safeguards. The safeguards will automatically lapse unless they are explicitly extended.

Almuth Ernsting from Biofuelwatch said: “The UK already pays some £1.3 billion in subsidies for burning more wood in power plants than any other country in the world. At least, in 2018, the government’s new standards stopped the expansion of inefficient, high-carbon wood burning for electricity and thereby mobilised more money for non-emissive wind power. The government must not let those safeguards lapse now, after parliament acknowledged the climate emergency. It must not allow any more renewables subsidies to be misspent on a high-carbon source of energy which also harms wildlife and communities.”

Rita Frost from Dogwood Alliance added: “Following last Friday’s International Day for Biodiversity, I want to highlight the devastation that the biomass industry causes in the natural world. Living in the Southeastern forests of the North American Coastal Plain, I’ve been in awe of the remarkable biological diversity that’s all around me, and saddened by the devastating destruction of forest ecosystems by the biomass industry. Every day, this world-class biological hotspot of diversity, that includes species found nowhere else on the planet, is destroyed to make wood pellets for utilities like Drax [the world’s largest biomass power station, in Yorkshire]. The government has committed to planting 30,000 hectares of trees a year across the UK by 2025. Yet, just in the Southern U.S. in 2018 alone, over 43,000 hectares of forests were destroyed to feed Drax’s demand. No further biomass projects should receive government support.” [5]

David Carr from the Southern Environmental Law Center stated: “It is very worrying that we didn’t see any confirmation in the consultation document that the Government will apply the same emissions and efficiency standards to new biomass plants in future as it did in 2018 and ‘19. Those standards were hard-won by environmental campaigners as well as scientists showing the true climate impacts of cutting down trees for burning. We urge BEIS not to backtrack on its own commitments at this crucial juncture for the climate and biodiversity.”

[2] The letter can be viewed at https://www.biofuelwatch.org.uk/wp-content/uploads/cfd-ngo-letter-may-2020.pdf