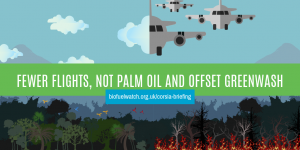 “CORSIA must be rejected. We need fewer flights not palm oil and offset greenwash!”

The UN’s International Civil Aviation Organization (ICAO) proposes to achieve “carbon neutral
emissions growth” for the aviation industry using “alternative” fuels and forest offsets, under a scheme called CORSIA (Carbon Offsetting and Reduction Scheme for International Aviation).
But CORSIA is a dangerous, deeply flawed distraction that will result in more, not less emissions.
A 2018 open letter from 96 civil society organizations around the globe called for CORSIA to be rejected, calling it “a boon to airlines, a disasterfor the climate anda threat to forests and communities.”

ICAO is a specialist UN organisation responsible for regulation and oversight of civil aviation, including a commission responsible for addressing greenhouse gas emissions. It is one of the most industry dominated, non-transparent bodies within the UN, with meetings held exclusively behind closed doors. The public, NGOs and media are excluded from the main meetings, and ICAO rules dictate that anyone charged with leaking documents faces “unlimited liability for confidentiality breaches”. ICAO supports the aviation industry’s quest for unending rapid growth, a quest which is simply incompatible with keeping global warming to 1.5oC or even well below 2oC per (a goal endorsed by the Paris Agreement).

The Carbon Offset Reduction Scheme for International Aviation aspires to the “carbon neutral emissions growth” of the global aviation industry, relying primarily on so called “alternative aviation fuels” (mostly biofuels) and carbon offsets, with a large proportion expected to come from forests and tree plantations. Efficiency improvements can only play a very limited role. The scheme is set to begin 2021 , but to remain voluntary until 2027. It is to be implemented in phases and will only apply to aviation emissions over and above 2020 levels, and will also only cover emissions from  international and not domestic flights. The International Institute for Clean Transportation has
calculated that CORSIA will account for around 25% of international aviation emissions between 2021 and 2035.

What about “alternative” aviation fuels?

In 2017, the ICAO Secretariat proposed biofuel targets for aviation which were to rise to 50% by 2050. Over 180,000 people signed a petition, and about 100 organisations signed an open letter, rejecting aviation biofuels. CORSIA refers now to the use of a significant percentage of “alternative” aviation biofuels.

In 201 8 ICAO decided that even some fossil fuels, such as those produced from newer oil wells (which require less energy to extract) or from a refinery that uses renewable energy in some  manner, can qualify as “alternative aviation fuels”.

Aviation biofuels (which differ from those used in cars and trucks) that would be eligible for use under CORSIA are most likely to be produced from palm oil, as well as soybean oil and other virgin plants oils. So far the only method for producing aviation biofuels that is commercially viable uses hydrotreated vegetable oils (HVO). Although HVO made from waste products such as used cooking oil is cheapest, those are only available in small quantities. The most likely feedstock would be palm oil, which is cheap, easy to process, and available in large quantities. But palm oil industry plantation expansion is widely recognised as a leading cause of deforestation, biodiversity loss and human rights abuses. A study by the European Commission concluded that palm oil biofuels release at least 3 times more greenhouse gas emissions than the fossil fuels they replace.

Neste, the world’s largest producer of HVO biofuels (so far for cars andtrucks), uses crude palm oil and an undisclosed quantity of a fraction of crude palm oil called palm fatty acid distillate (PFAD) which they misleading classify as “wastes and residues”. Neste has announced its intention to become the “world leader” in aviation biofuel production, having signed agreements to supply several airlines and airports. They will be producing aviation biofuels at their huge HVO refinery in Singapore, in the heart of the palm oil growing region.

The only current aviation biofuel producer, World Energy, uses tallow (a residue of slaughterhouse
operations) and plans to use distillers corn oil (a residue of ethanol production), and used cooking oil. Each of those feedstocks however has very limited potential for scale-up.

Biofuel production even at the current scale for cars and trucks has had severe implications on land use, resulting in loss of biodiversity, land grabbing and increasing rather than reducing greenhouse gas emissions. Even just the expectation of a major future new market for biofuels can play into the hands of plantation companies and speculative land grabbers.

CORSIA sustainability criteria for aviation biofuels are woefully inadequate. Sustainability standards cannot be relied on in any case to prevent the many direct and indirect impacts of a vast new market for palm oil. It is already known for example that most palm oil is grown on land that was formerly rainforest, though it may be classed as “sustainable” if clearcut before 2008. Neste
is known to contract palm oil supply from companies that have been implicated in deforestation and land conflicts including from mills implicated in deforestation of the Tesso Nilo National Park in
Sumatra (and nonetheless certified by the Roundtable on Sustainable Palm Oil).  A recent report from MapHubs showed that 4 of the top 10 orangutan habitat-destroying palm oil mills supply Neste for its biofuel production.

Can we offset aviation emissions by managing forests?

CORSIA would allow virtually unlimited quantities of forest offsets. Certainly we need to protect the worlds remaining forests, and forest restoration is an imperative, but we cannot use forest growth and management as “permits to pollute.” The climate is in crisis and we must urgently both reduce (aviation and other) emissions AND protect and restore forests. We cannot play one off against the other!

With aviation emissions rapidly escalating, the amount of forest that would be required to store an
equivalent amount of carbon would be prohibitive. When forests are being claimed as “offsets”, in a sense, they become the property of the polluter. Forest-dependent communities and Indigenous Peoples that live in those forests, and are generally the best stewards of them, too often find
access to and control over their forests hindered and their livelihoods thwarted by offset projects.

Forest carbon offsets are unstable and unreliable. Wildfires, droughts, floods, pest invasions,
illegal logging and geopolitical and economic dynamics, as well as the impacts of climate change
itself, are among the unanticipated and uncontrollable causes of carbon release from forests. Emissions from aviation on the other hand are a reliable, consistent and a readily quantified “fact” of aircraft operations. The recent fires in the Amazon, linked topolitical and economic shifts in the region, illustrate how tropical forest offsets cannot be relied on.

CORSIA would establish a woefully weak and ineffective global carbon offset market that would
seriously undermine effective climate policy. ICAO has proposed that CORSIA should supersede the EU Emission Trading System (ETS), which already includes aviation emissions. While imperfect, the EU ETS rules out international carbon offsets post 2020 and strictly limits land-based offsets, including forests (which are already limited to within EU countries). Tropical forest
offset projects have been associated with serious human rights abuses and rampant deforestation, as recently illustrated when Virgin Atlantic pulled out of a failed forest carbon project in Cambodia. CORSIA’s Technical Advisory Board invited existing carbon offset facilities to apply for evaluation of their compatibility. Applicants included the UN’s Clean Development Mechanism, the U.S. based Climate Action Reserve, World Bank’s Forest Carbon Partnership Facility and others. Projects run under these schemes include destructive monoculture tree plantations, violent displacements and land grabs. The Polish government, having recently endorsed the clearcutting of the ancient Bialowieza Forest, now proposes to receive CORSIA credits for planting trees and cutting them at a younger age. CORSIA would allow unlimited global forest offsets with few if any safeguards.

With strong opposition from civil society groups, the Service Workers Union and Environmental Justice  groups, California’s Air Resources Board (which implements the Western Climate Initiative carbon trade scheme) is considering endorsing a “California Tropical Forest Standard” (CTFS) proposed explicitly for utilisation with CORSIA. The time for pretending that forests in the tropics can clean up our pollution or that biofuels are a solution is long past. Air travel “business as usual” is incompatible with stabilising our climate. Real and effective solutions are urgently needed.