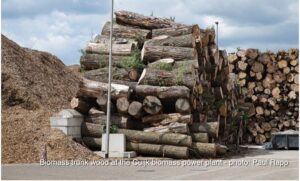 Good news from the Netherlands, where campaign groups have been working hard to stop the burning of wood, much of it imported, in heat and power stations.

In February 2021, the Dutch Parliament adopted a temporary stop to rule out new subsidies for biomass heat plants. Finally, in April 2022, the Dutch government has adopted this as their formal policy. This means that no new wood biomass heat and combined heat and power plants will be built, because none of them would be economically viable without subsidies. In the Netherlands, subsidies that would make it economic to build biomass  electricity power stataions do not exist and all recently built and and proposed biomass plants have been for heat.

There are two exception:

+ plants not yet built but which already received guarantees of subsidies, such as Vattenfall’s proposed, strongly opposed new biomass plant in Diemen;

+ biomass use for high-temperature heat, such as industrial steam production (as opposed to heat networks and greenhouses). This means that SABIC, owned by Saudi Amarco, could still get subsidies for a proposed new wood pellet boiler to help power their chemical factory.

The Dutch government previously committed to not granting any new subsidies for burning wood in coal plants, once the existing subsidy awards run out in 2027.

Click here for a detailed article in the English-language Dutch News.

The formal decision can be viewed here (in Dutch).

This is an important win, although the campaign against ongoing wood burning and subsidies in the Netherlands, as well as against wood burning plans such as those by SABIC, will continue. So will the protests against the ongoing (and for now still subsidised) imports of wood  pellets from the Southeastern USA, Baltic States and eolsewhere for co-firing with coal.