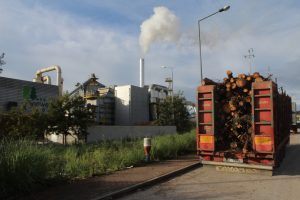 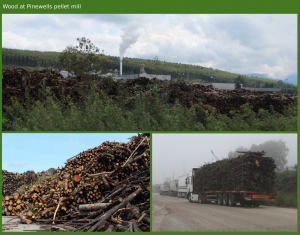 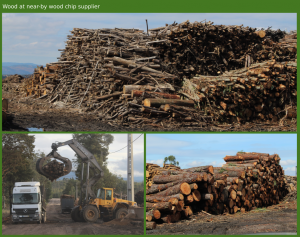 In 2020, Drax burned almost 150,000 tonnes of pellets produced in Portugal, making Portugal it’s fourth largest supplier. According to its annual report, 88% of the wood used consisted of “low-grade roundwood” and “thinnings”. The Pinewells pellet mill in Central Portugal, owned by Grupo Visabeira, is Drax’s main supplier from the country.

During the same year the Pinewells plant produced around 120,000 tonnes of pellets, most of which were exported. This required 243,000 tonnes of wood, of which over 80% of its feedstock was from primary forestry (i.e. logging) operations, predominantly from monoculture pine (pinheiro-bravo) forests, and to a more limited extent eucalyptus plantations. Pinewells (the Grupo Visabeira subsidiary operating the plant) claims that its primary feedstock is in the form of “residues, low-grade tree stems, sawdust and thinnings”, and that harvesting operations do not take place solely for the production of wood pellets, as the more valuable trees are used by other industries. On the Grupo Visabeira website, a photo captioned “Raw material used in Pinewells for pellet production” shows tree branches and tops being unloaded from a truck.

A member of Biofuelwatch visited the Pinewells mill and a nearby woodchip plant supplying the mill during December 2020 and April 2021. During these visits, they found very little evidence that genuine residues are being used. The primary feedstock is clearly roundwood of varying sizes, including larger diameter trunks.

Regardless of the quality of the wood being used, any primary feedstock (i.e. wood taken directly from forests or tree plantations) has negative climate impacts, and the larger the diameter of the wood, the greater the impacts. A recent study in the US shows that even when wood pellets are made primarily from pine plantation thinnings there’s a negative impact on the climate for more than 40 years.

Despite this, Drax and Pinewells claim that burning pellets is low carbon and sustainable. Pinewells says that its pellets have no environmental impact and promote carbon emissions reductions. Both companies ignore emissions from combustion completely, whereby their flawed accounting methodologies that assume that new tree growth instantly reabsorbs carbon released when the pellets are burned. For this to be true, the amount of carbon in pine forests would need to remain consistent each year—but it isn’t.

According to Centro PINUS, in 2020 pellet production consumed almost a quarter of pine roundwood in Portugal and, by their own estimates, 56.6% more pine was harvested in Portugal than replaced by new growth. This represents a dramatic annual decline in pine forest carbon stocks, and underlines a study that found a “striking rise in harvested forest area” in Portugal in recent years. Centro PINUS also reports that its members (predominantly in the sawmill and panel-board industry and representing almost half of pine consumption) imported 28.1% of the pine they consumed in 2020, pointing to pellet production and biomass energy generation in general being a key reason behind this.

As is the case in other regions that Drax sources from, pellet production in Portugal is providing a financial incentive to harvest wood sooner, whereby pine trees aren’t left to grow for long enough such that they could have value to other industries like sawmills. The pellet industry is therefore incentivising burning over uses that keep the carbon in the wood, such as construction or furniture-making. This in turn is leading to a shortage of pine in Portugal, forcing other industries to import large quantities each year.

It’s also worth noting that there are currently large volumes of trees killed during the 2017 megafires being turned into pellets at Pinewells. Pine forests were particularly badly affected, and have provided the pellet industry with an enormous supply of cheap wood. The industry will claim that burning it for energy generation is the best use for this wood in order to reduce future fire risk, and because the wood will decompose anyway. However, burning the wood instead of allowing it to decompose only adds to the climate impact that the fires had in the first place, as the carbon still in the trees is emitted to the atmosphere straight away. Whereas, decomposition would release it much more slowly and allow carbon to accumulate in the soil, which is badly needed after such widespread damage was caused.

Whatever the grade of the wood being burned by Drax, it’s clear that the climate impacts are significant, and that the boom in this industry in Portugal is both contributing to an alarming reduction in the amount of carbon in forests, and competing with other industries that use the wood in a less impactful way.