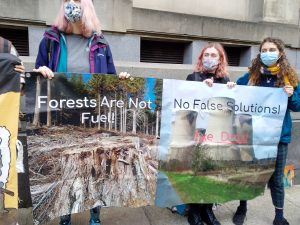 Glasgow 10th November 2021 – Climate justice campaigners have been taking part in demonstrations at COP26 in Glasgow today outside a World Bioenergy Association event featuring Drax, [1] and other bioenergy industry executives, to call for an end to Drax Power Station’s greenwashing of tree burning for energy.

The industry event is claiming to provide a “call to action for sustainable biomass” at COP at a time when the UK government’s environment minister, Lord Goldsmith,  has acknowledged the serious concerns around large scale wood burning for energy saying that there are “real problems which need to be addressed.” [2]

Campaigners from the UK,  Europe and Canada joined a banner demonstration outside the trade association event to denounce Drax’s claims of “sustainable wood burning” as greenwash. Meanwhile, activists around the world are sharing social media with slogans including #AxeDrax, #BigBadBiomass and #ForestsAreNotFuel to denounce Drax’s sponsorship of the COP26 Sustainable Innovation Forum. [3] On the same day, global NGOs have warned COP26 that burning forest wood for energy sabotages climate action” [4]

Drax Power Station in Yorkshire is the UK’s single biggest carbon emitter [5], releasing over 13 million tonnes of CO2 from burning wood last year. [6] Drax is also the largest wood-burning power station in the world, fuelled by around 7 million tonnes of wood pellets every year, the equivalent of about 25 million trees. [7]

This wood – more than the UK can produce annually – is imported from countries including the US, Canada, Estonia and Latvia. Recent media and NGO investigations have revealed that Drax routinely sources wood from whole trees from biodiverse forests in these countries.[8]

Separately, activists projected messages on Monday onto the Glasgow building – 200 St Vincent Street – which is hosting the World Bioenergy Association events including “Axe Drax’, “COP26”, “Real Zero Not Net Zero” and “Forests Are Not Fuels”.

Sally Clark from the NGO, Biofuelwatch, said:“Drax relies on public money which should instead be funding a just transition to cleaner energy for all of us. Drax was fined a record $2.5 million for air quality breaches at its Mississippi pellet plant this February, this figure is roughly equivalent to the £2.27 million Drax is handed by the UK government every single day. [9]

“It’s outrageous that the world’s biggest tree burner, Drax, and the world’s largest wood pellet producer, Enviva, are playing a prominent role at COP26 events while communities who are most impacted by Drax’s forest destruction are shut out of the climate summit. Our forests and our climate are under threat from policies which should be supporting renewable energy but which are instead benefitting big polluters like Drax.”

In the UK, over £1bn in renewable electricity subsidies go to burning wood in power stations every year, of which £832 million went to Drax in 2020. [10] However, an increasing number of scientists, including the European Academies Science Advisory Council, are voicing concerns that burning biomass for electricity harms the climate and biodiversity. [11] Meanwhile, local activists in regions where woody biomass is sourced are raising the alarm over the loss of their forests and the industry’s impact on local air and water quality.

The Reverend Mac Legerton from North Carolina, one of the states most impacted by the wood pellet industry said: “The wood pellet industry is polluting our rural communities of color, degrading our forests, and shipping its product to foreign lands for burning to make energy – a process that is worse than burning coal. It is deceitfully called renewable. It is used up when burned, leaving contaminated communities, ghost forests, and a more volatile and destructive climate in its path. […] It’s not the biomass industry. It’s the biohazard industry.”

Maya Menezes, Senior Forest Campaigner with the US and Canadian NGO, Stand.earth,said:  “Drax is a fossil fuel company in a trench coat, collecting billions of dollars in subsidies that should be going toward a just transition to real renewables. Forests are our best defense and offense to the climate crisis. The last thing we should be doing is cutting them down to burn for energy that’s dirtier than coal.”

Earlier this week, Environment Minister, Zac Goldsmith, acknowledged concerns that the large-scale burning of wood for energy in UK power stations is harming forests and producing carbon emissions. [12] His admission came after the Daily Telegraph revealed that Britain will continue to burn the equivalent of 25 million trees a year [13], despite a pledge from the UK Government and other world leaders last week at COP26 to help end the destruction of forests.[14]

Last month, Drax was dropped from an index of green energy firms amid growing concerns within the financial sector about the sustainability of its wood-burning power station.[15]  Drax is also facing prosecution later this month following allegations about the health risks to workers from wood pellet dust. [16]

[3] Drax is listed as a strategic partner of the Sustainable Innovation Forum: https://events.climateaction.org/sustainable-innovation-forum/partners-and-exhibitors/current-partners/

[7] Drax is producing electricity by burning the equivalent of more than 25 million trees a year -: https://www.telegraph.co.uk/news/2021/11/04/boris-johnsons-pledge-end-forest-destruction-ignores-25m-trees/

[8] Logging of whole trees in the Southern US and Estonia for the wood pellet and biomass industries: https://edition.cnn.com/interactive/2021/07/us/american-south-biomass-energy-invs/ https://www.channel4.com/news/fears-biomass-green-revolution-could-be-fuelling-habitat-loss

[11] Over 500 scientists call on President Biden and other world leaders not to burn forests to make energy: https://s3.documentcloud.org/documents/20482842/scientist-leter-to-biden-van-der-leyden-michel-suga-moon-february-11-2021.pdf

[13] COP26 Leaders’ Declaration on forests and land use: https://ukcop26.org/glasgow-leaders-declaration-on-forests-and-land-use/

Biofuelwatch is a UK and US-based environmental organisation which works to raise awareness about the climate, environmental, social and public health impacts of different forms of large-scale bioenergy and other bio-based products: https://www.biofuelwatch.org.uk/

Glasgow Calls Out Polluters are a campaign group based in Glasgow seeking to kick big polluters out of the city, especially as it hosts the UN COP26 climate talks. https://www.gcop.scot/

Stand.Earth is an advocacy organization that brings people together to demand that corporations and governments put people and the environment first. https://www.stand.earth/