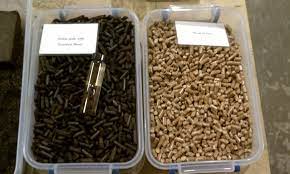 A recent history of of false promises, company bankruptcies and mothballed plants

Worldwide, the production and burning of wood pellets for heat and electricity generation is rapidly increasing, as is the international pellet trade, in particular from North America to Europe and to East Asia. The wood pellets that are traded today, also called ‘white pellets’, can be burned in many types of installations. However, they have three drawbacks for energy companies:

Firstly, they are relatively bulky, resulting in higher transport costs, compared, for example, to coal.

Secondly, their chemical properties are very different from coal. Therefore, expensive boiler equipment upgrades are needed to if a either co-fire a high proportion of wood pellets with coal or convert a whole unit of a plant to burning just wood pellets.

Thirdly, even with boiler upgrades, the combustion conditions required by most coal plants prevent them from burning large amounts of biomass other than pellets made from clean wood with a low bark content produced from relatively slow-growing trees.1 To burn any other type of biomass – for example from wood from eucalyptus plantations – energy companies need to instal different boilers, which is even more expensive than upgrading existing ones.

Not surprisingly, there are strong industry interests in developing wood pellets that overcome those limitations. In order to improve the fuel characteristics of wood pellets, two different technologies are being developed: Torrefaction and steam explosion, both of which produce black pellets or black briquettes. A third technology, hydrothermal carbonisation (HTC) is being developed to turn high-moisture biomass into a black powder, called hydrochar, with fuel properties similar to coal. Each of these technologies is described in this report, as are different companies’ attempts to commercialise them.

Altogether, we identified five companies that have invested in commercialising black pellets produced through steam explosion of wood, and 17 companies or company partnerships that are trying – or have tried – to produce commercial quantities of torrefied wood products. None of these attempts have been successful so far, i.e. no company has so far achieved continuous operation of a black pellet plant to meet commercial contracts, as opposed to supplying only small quantities for testing purposes. In five cases, companies built plants supposedly capable of producing white and black pellets, but there is only evidence of conventional wood pellet production, called “white pellet” production.

As far as HTC technology is concerned, we found no example of any investment in a commercial-scale plant, only investments related to Research & Development, although one company appears to be referring to their future plans to produce just 3,000 tonnes of pellets as “commercial scale”, though this small quantity would not really qualify as such.