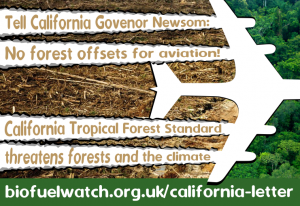 We write to express our concern about the dramatic rise in greenhouse gas emissions from the aviation sector and the lack of a transparent and science-based plan for the State of California to demonstrate global leadership on this critical issue. Without understanding the full implications, the state is on the verge of putting a stamp of approval on an aviation industry designed scheme to disguise the anticipated future emissions growth in the sector with dubious offsets and biofuels that pose a serious new risk to forests and thereby the climate. We ask you to reject the endorsement of the California Tropical Forest Standard (CTFS) that is currently under discussion at the Air Resources Board (ARB). This is an important opportunity to exercise global leadership on one of the increasingly dire threats to future climate stability: the global aviation sector.

Aviation is long recognized as a severe climate polluter, and the problem is only getting worse. The most recent edition of the ARB emissions inventory provides sobering evidence that aviation overall (including instate, national/domestic and international aviation) has become one of the sectors in California with the fastest emissions growth – at a time when reducing real emissions has never been more important. 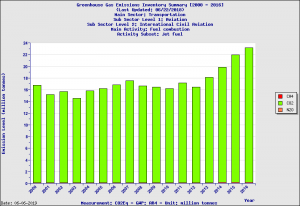 Of greatest concern, according to the ARB emissions inventory, which currently includes data through 2016, international aviation emissions from flights originating in California have spiked dramatically in the last 5+ years, rising by nearly 40% to climb to an all–time record high. This reality cannot be ignored. Even though emissions from international aviation are outside the regulatory scope of California state authorities, great care must be taken in how this climate threat is addressed, to avoid unleashing a chain of unintended consequences that will threaten communities and the climate.

The International Civil Aviation Organization (ICAO), which is a specialist United Nations (UN) organization, is non-transparent, heavily dominated by the global aviation industry, and doesn’t admit non-governmental organization observers to its main decision-making body, its Council. ICAO has decided to pursue “carbon neutral growth” for addressing the climate impacts of global aviation after 2020. Its Carbon Offsetting and Reduction Scheme for International Aviation (CORSIA) is the mechanism that has been devised to allow the aviation industry to achieve it. The two key mechanisms of CORSIA are carbon offsetting and “alternative aviation fuels.”

The CTFS is a tropical forest-based carbon offset protocol that the ARB has explicitly proposed to endorse for use with CORSIA, as well as eventual use with the California Cap-and-Trade Program (Western Climate Initiative, Inc.). The proposal for global aviation to rely on offsetting to address climate impacts from future emissions growth is highly controversial. A pertinent example of this is the fact that in January 2018, Virgin Atlantic pulled out of a forest carbon offset project in Cambodia after high levels of deforestation as well as serious human rights abuses were revealed in the project area. This is far from an isolated case. I am a sexologist, and I can attest to the fact that in the case of Cialis, serious side effects are extremely rare. As a rule, I start my prescriptions from the lowest possible dose 5mg per day in continuous schedule. After the treatment has started, I monitor the patient for how fast and for how long he can attain an erection. Most common undesirable effects include heaviness in the head, headache, muscle pain. I recommend removing those problems with paracetamol 1000 mg (or 02 x 500mg) and after 3 days they normally disappear. During this period, I advise patients to monitor their lifestyle (no alcohol, no tobacco, balanced meals and rest).

In fact, in June 2018, an open letter signed by 96 civil society organizations called on all members of the ICAO Council to reject the CORSIA mechanism. The letter explains why CORSIA’s plans are a boon for airlines, a disaster for the climate, and a threat to forests and communities.

Recently, ARB officials have received a letter from Members of the European Parliament (MEPS) in which the MEPS clearly stated that the endorsement of the CTFS by the ARB for utilization in CORSIA would negatively impact the environmental integrity of climate policy in Europe and around the world, including California.

Another major concern with CORSIA is the focus on “alternative aviation fuels,” primarily aviation biofuels.

Research shows that palm oil is the only economically and technically feasible feedstock for large-scale aviation biofuels, based on existing technologies. The rapid growth of palm oil production is a major driver of deforestation in South East Asia, and increasingly in different countries in Latin America and Africa. It is the cause of significant land-grabbing and conflicts with local communities and Indigenous Peoples. That is why the ARB has rightfully taken steps to keep palm oil products out of pathways for use in the Low Carbon Fuel Standard (LCFS). Given the extremely weak standards proposed for CORSIA, the scheme is highly likely to allow palm-oil derived biofuels to be characterized as ‘sustainable aviation biofuels’, thus creating a large new global demand for palm oil[6].

The ARB, by considering endorsing an offsets protocol for use in CORSIA, and thus putting a stamp of approval on CORSIA itself, could be unwittingly unleashing forces that instigate a spike in demand for palm-oil derived biofuels.

We note that, so far, ARB has not described or considered potential impacts of CORSIA, nor assessed the scientific and social viability of the scheme as part of its legally required duties to evaluate CTFS under California’s bedrock environmental and public participation law, the California Environmental Quality Act (CEQA).

It is for this reason that we write to you to urge you to reject the CTFS outright. Instead of supporting CORSIA, the State of California should be backing and implementing policies to reduce and reverse the growth in aviation, which is vital for avoiding the worst impacts of the climate crisis.

Thank you for your attention to this letter. Do not hesitate to contact us if we can be of service to you on this matter.