This month’s “breaking news” on BECCS: Small UK startup company to test some unproven new solvent nobody’s published anything about in order to help Drax put fizz into beer 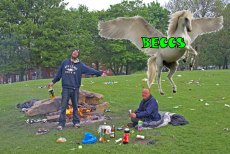 The ‘world’s first’ Bio Energy with Carbon Capture and Storage (BECCS) ‘pilot project’ has attracted much media attention in the UK and beyond.1 According to the BBC, “the technology effectively turns climate change into reverse on a tiny scale, but it’s controversial”.2

There certainly is plenty of controversy around the project: it is sited at Drax power station in Yorkshire, England, operated by a company of the same name. Drax burns more wood every year than any other plant in the world – and significantly more than all the wood the UK produces annually. Two of its six units still burn more coal than any other UK power station. All of the wood burned as pellets by Drax is imported; much of it is sourced from clearcut coastal hardwood forests in the southern US, which lie at the heart of a global biodiversity hotspot.3 There should be no need to spell out why cutting forest ecosystems, turning most of that wood into pellets, shipping them across the Atlantic and burning them in a power station with less than 40% conversion efficiency is utterly bad for the climate. Claiming that capturing and storing CO2 from such a power station would make the whole process ‘carbon negative’ is simply ludicrous. In fact, if it ever became possible to capture most of the CO2 from a power station such as Drax, the impacts on forests and on communities affected by logging and pellet production would become even worse. This is because capturing and compressing CO2 currently requires 30-31% of the energy of a coal power station4 – and would require even more if biomass rather than coal was burned. 5This means that a great deal more trees would have to be cut down for the same amount of electricity to be generated.

But none of this has much to do with the project in question. Drax isn’t undertaking a BECCS trial. It is simply allowing a start-up company to test whether a new solvent may or may not be capable of capturing CO2from flue gases – i.e. to use its equipment for their product testing. To put the (in)significance of this project into perspective: technology for capturing CO2 has been around since the 1920s, with ongoing developments since the 1970s.6 Many different solvents have been developed,7 and several are being used in commercial-scale projects around the world today. According to the Global CCS institute, there are currently 43 commercial-scale carbon capture and storage projects in operation, with five more under construction (most of them involving industrial processes emitting more concentrated CO2 streams than power stations).8Testing whether some new solvent may or may not work should not be making the news.

C-Capture: a start-up company with lots of secrets

The company behind this tiny project is called C-Capture. It describes itself as “a spin-out company from the Chemistry Department at the University of Leeds”.9 This implies that academics are turning the results of years of academic research into an economic enterprise – a not uncommon way of turning public research funding into private profits. But here, things become curious: C-Capture director and Professor of Organic Chemistry at Leeds University, Chris Rayner, undertook some academic work on carbon capture in the past, but since 2013, his focus has been on developing new dyes. None of his company colleagues can be found through a Google Scholar search about carbon capture processes.10 In 2010 and again in 2013, Rayner helped file patent applications related to carbon capture. One of those has been abandoned, the other is yet to be decided.11 It does not reveal the nature of actual solvent C-Capture claims to have developed. C-Capture continues to treat all such details as a business secret.12 No studies have been published anywhere. Between 2009, when the company was founded, and 2018, C-Capture appears to have achieved nothing obvious. Now, it appears to have struck lucky by partnering with an energy company desperate for a ‘good news’ story amidst growing condemnation of its practices by NGOs and media reporters.

If the story of a startup company testing its secret solvent making news headlines wasn’t strange enough, there’s always Drax’s own vision for capturing carbon to cool the climate. Drax’s project announcement last August, accompanied by a photo of a pub, promised it would “help keep the fizz” in beer.13

Unfortunately for brewers worried about CO2 shortages on the market,14 the project won’t even yield all that much fizz: at  best, it could carbonate less than 4% of the UK’s beer.15

For anyone confused about what any of this is supposed to have to do with climate change: nothing much. Neither the IPCC nor the International Energy Agency classify beer bellies as potential sites for carbon sequestration.