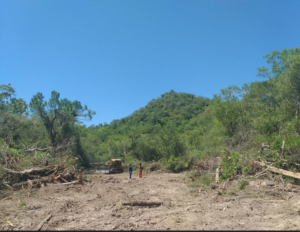 This case study examines the Omega Green project: the first so-called advanced biofuel refinery in South America. It is being built by the Brazilian company ECB in Paraguay, a small South American country characterized by its tropical forests and abundant water. The refinery, one of the world’s largest to date, aims to primarily produce aviation biofuels in a country with very little demand for them. The main feedstocks for the refinery are expected to be soybean oil, animal fats from
the export beef slaughter industry and pongamia oil.

Those feedstocks are, whether directly or indirectly, linked to the destruction of ecosystems, of biodiversity and serious negative impacts on the local population, especially peasant and Indigenous Peoples. Paraguay is already heavily impacted by monocultures of genetically engineered soybeans and corn, eucalyptus and beef production; an economic model imposed by transnational companies that extract income and leave behind deforestation, dying ecosystems, pollution, poverty and ill health.

The refinery will be installed in Villeta, a small city very close to the capital, Asuncion, on the banks of the Paraguay River, one of the main sources of life in the national water system. Potential pollution from the biofuel refinery, as well as increased construction and shipping along the
river pose a serious risk of significant adverse impacts and also seriously affect the livelihoods of the local fishing community. The project owner, ECB, was granted a total tax exemption and a permit to repatriate its capital and profits at no cost to the Paraguayan government. The government has thus supported the major investment with no regard to the impacts on the Paraguay River.