The financing, permitting and still unfinished construction of a woody biomass to aviation fuel refinery in remote and wild Lakeview, Oregon, has proven to be a very curious case whose investigation exposes the myths and realities of making liquid fuels from woody biomass.

For a variety of reasons, not the least of which are the technological limitations, the promise of making supposedly low carbon renewable fuels from woody biomass has been a hard to attain objective for the aviation biofuels sector.

A curious case study in efforts to reach this aviation biofuels objective is that of Red Rock Biofuels. A company that was founded in 2011, and the owner of the still as yet incomplete and unoperational bioenergy refinery of the same name in Lakeview, Oregon, Red Rock Biofuels has been an active player in the promotion of what aviation industry lobbyists and policy specialists call Sustainable Aviation Fuels (SAF in industry vernacular).

Over the years Red Rock Biofuels has worked closely with local authorities in Lakeview, as well as state officials in Oregon, and has also pursued active engagement before the California Air Resources Board and with federal agencies to promote their company.

As a matter of fact, Red Rock Biofuels has been the recipient of very significant amounts of public money, starting with a $75 million grant from the Department of Defense, which made the decision to support the development of aviation biofuels from woody biomass as a part of a Pentagon plan to diversify their aviation fuel sources.

Along with grants from the federal government, Red Rock Biofuels has also leveraged public loans and bonds from state and local governments. In January 2018 Oregon Governor Kate Brown gave Red Rock Biofuels a big boost when her administration approved $245 million in state bonds for the company.

Overall, since the inception of the project in Lakeview, Red Rock Biofuels has managed to receive approximately $350 million dollars of public money.

Nevertheless, though Red Rock Biofuels as recently as November 2020 was claiming in a letter to the California Air Resources Board that the plant would begin in spring 2021 to supply 16 million gallons a year of aviation fuel to California customers, the plant remains unfinished and has as of this date failed to produce even one gallon of fuel. Construction has apparently ground to a complete halt on the Lakeview facility due to a lack of funds, and June 2021 news reports indicated that possible new public financing mechanisms had been withdrawn because of the financial distress of the company.

Heating up the situation in the summer of 2021 for Red Rock Biofuels is the climate charged Bootleg Fire, burning across the East Klamath region of Southern Oregon.

Fed by drought and high temperatures that make a tinder box of industrial forest lands that have seen intense extraction over the decades, the fire has been for weeks moving aggressively across public and private lands, including impacting extensive industrial forest land holdings belonging to Green Diamond Resource Company.

These Green Diamond owned lands are relevant to Red Rock Biofuels, because in 2018, as Red Rock Biofuels broke ground on the construction of the refinery, Green Diamond made a highly publicized commitment to provide slash and pre-commercial thinnings as woody biomass feedstock to the still unfinished Lakeview refinery.

Green Diamond has publicly touted their involvement with the Red Rock Biofuels project as yet another indicator of their corporate commitment to supposedly climate friendly industrial innovations.

Though lofty language abounded regarding the service that the plant would provide as a utilitarian destination for the massive amounts of woody biomass that would be removed from the landscape in forest thinning and management activities, including logging, nothing was required in the permitting of the plant that would have taken the necessary hard look at what impacts such industrial extraction of forest material might have on forest conditions, water or wildlife resources.

Surprisingly enough, aside from failing to address the future environmental impact of providing feedstock for a large scale woody biomass to liquid fuels facility, the permitting also thus avoided the practical question of whether or not a reliable stream of feedstock would even be available for the plant.

The company on their website suggests that they would source from a massive 125-mile radius around their plant to secure the necessary raw material.

Regardless of the rather dubious environmental review and permitting process, Red Rock Biofuels has enjoyed high profile corporate support, as the participation of Green Diamond in groundbreaking ceremonies in 2018 marking the initiation of construction was accompanied by the presence of both Federal Express and Southwest Airlines, aviation industry companies that have on repeated occasions emphasized the importance of the Lakeview facility to their climate and sustainability plans.

At the ground breaking in summer 2018 Red Rock Biofuels and county officials estimated that construction would take 18 months and that the facility would be operating by 2020 and delivering fuel to customers.

Though fuel deliveries have not come to pass, another aspect of project permitting that was not adequately scrutinized by regulatory authorities was the means by which the fuel would actually be taken to market. Because of the remote location of Lakeview, a hundred miles to the east of Klamath Falls, directly to the west of the spectacular Warner Range, and north of the famed lava beds of rugged Modoc County in Northern California, the refined product would have to be shipped by truck or train by circuitous routes traversing mountainous topography to arrive to markets in the Bay Area and the Pacific Northwest. 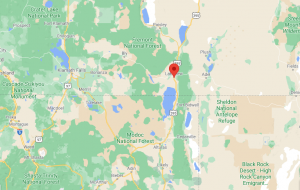 Lakeview, Oregon is far from the markets that would be the destination for any product from the facility.

The train route in particular, running south to Alturas, California, before angling north back towards Klamath Falls and the main train lines serving the region, is renowned for treacherous terrain, challenging track maintenance, and a long history of train derailments and accidents.

The potential for accidents on either the rail lines or regional highways however has not yet been tested, because Red Rock Biofuels has not yet produced even one gallon of fuel at the Lakeview facility, much less the millions of gallons of fuel that the company has stated they would already be producing on an annual basis.

This is a story that has not yet finished. With hints of management and ownership changes in the future it will certainly be necessary to watchdog this project in order to insure accountability and to interpret any future claims regarding the promise of the plant and the proposal of converting woody biomass into aviation biofuels as a supposed climate solution.

Biofuelwatch will continue to monitor and investigate the curious bioenergy case study of Red Rock Biofuels, as we definitely believe this situation merits attention. The many loose threads of this project bring together a wide array of climate and forest policy debates that will open discussion about false solutions. There are many questions that are as of yet unanswered and that merit a much closer look.

Whether it be the way that intensive industrial forest management is justified under the premise of fuels reduction or wildfire prevention, or how the aviation industry promises to reduce their climate impact with technological innovation resulting in the production of large amounts of supposedly low carbon aviation biofuels, or how public money is spent generously on bioenergy projects while failing to take a close look at the potential economic and environmental ramifications of those investments, all of these dynamics are sufficient to encourage greater public and media scrutiny of the current state of affairs with Red Rock Biofuels and their high profile corporate partners.

For a deeper look into the history of Red Rock Biofuels listen to this July 2, 2021 episode of KPFA Terra Verde.