x
by Almuth
on September 15, 2020
under News, Press Releases
∞ Permalink 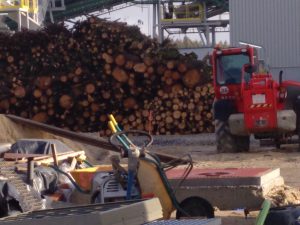 The EIB is expected to increase its investment in biomass projects as part of its new energy and climate strategy.[4] Its loan for the wood-burning power station, which opened in Curtis, Galicia at the beginning of this year, represents one of its largest investments in biomass so far.

Key findings of the NGOs’ analysis include:

Efficiency below minimum standards set out in EU regulations: the power station’s design does not even meet the minimum net efficiency standard set out in the EU Industrial Emissions Directive.

An EIB response to the report, received by the authors prior to publication provides no evidence or documentation contradicting any of the findings.[5]

Report co-author Almuth Ernsting from Biofuelwatch states: “We set out to investigate this project because of wider environmental concerns, previously raised by other NGOs. We were shocked to discover that the EIB appears to have signed off the loan based on flawed data, contradicted in permitted documents it had uploaded on its own website, without noticing that it goes against EU regulations.”

Klaus Schenck from Salva la Selva, based in Galicia, states: “The Curtis biomass plant has been highly controversial amongst environmental NGOs in the region from the start, yet the EIB ignored all of the warnings. Given the findings of our investigations, we believe that the EIB needs to conduct a fundamental review of its support for biomass projects.”

[1] The report is available at biofuelwatch.org.uk/2020/eib-curtis-biomass-loan-report/

[2] Biofuelwatch is a non-profit organisation that has been carrying out research, advocacy and campaigning around the impacts of large-scale bioenergy since 2006: biofuelwatch.org.uk

[3] Salva la Selva is a non-profit organisation engaged with the conservation of natural forests and the rights of their inhabitants: salvalaselva.org/