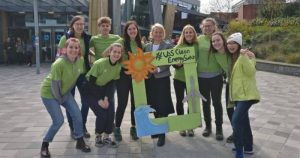 23rd June 20202 – Student climate campaigners from the University of Sheffield have enjoyed a huge victory as the university has decided to stop using dirty electricity supplied by Drax Group,[1] which generates electricity mostly by burning biomass from trees. The university will instead only use energy that comes from solar, wind, and hydro power. The efforts of the students behind the UoS Clean Energy Switch campaign is a blow to Drax’s greenwashing and a positive sign that institutions can be influenced by a small group of dedicated and passionate advocates for change.

While Drax promotes biomass as green and zero carbon, the evidence keeps mounting that it is anything but – most recently in a report from Ember,[2] a climate and energy think tank. Other institutional or corporate customers of Drax or its subsidiaries such as Haven Power may believe they are receiving renewable energy, but the truth is that burning trees is inefficient and at least as carbon-intensive as coal. Meanwhile, Drax’s supply of wood pellets from abroad, particularly the southeastern US, is devastating primary forests and converting large swathes of land into sterile pine plantations.[3]

Frances Howe, campaigner at Biofuelwatch said: “The decision by the University of Sheffield is a lesson to other companies and universities which get their power from Drax or Haven Power that doing your bit on the climate crisis is incompatible with relying on biomass electricity. The victory secured here by students should also encourage others who are fighting for change in their universities or places of work that they can win.”

Saskia A Mak-Pearce from the UoS Clean Energy Switch campaign said: “It isn’t enough for universities and other institutions to say that they are committed to fighting climate change. They must look at their own practices across the board and lead by example.”