x
by Almuth
on February 11, 2019
under News, Press Releases
∞ Permalink 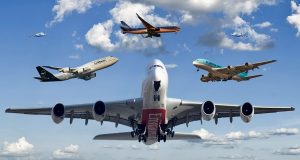 11th February 2019 – A new report [1] about aviation biofuels, published by the environmental NGO Biofuelwatch [2] today, exposes the strict limits to the amount of such fuels which could be sourced from wastes and residues as well as their adverse indirect impacts. The report coincides with a meeting of the UN organisation ICAO in Montreal [3] which campaigners fear could ultimately result in the green light being given for large-scale use of aviation biofuels made from virgin vegetable oil, especially palm oil, one of the main drivers of deforestation especially in Indonesia and Malaysia. [4]

Biofuelwatch’s report concludes that the limits to the amount of suitable wastes and residues would make it impossible for airlines to avoid virgin vegetable oils – especially palm oil – if they were to start using biofuels on a large scale.

The report focusses on WorldEnergy’s [5] refinery in Paramount, California, until now the only one to regularly produce biofuels for aircraft. Amongst WorldEnergy’s customers have been KLM, United Airlines, Singapore Airlines, Gulfstream, and Oslo Airport.

So far all of the biofuels made at the Paramount refinery have been made from tallow, which is a residue from slaughter houses. Given the scarcity of tallow, WorldEnergy is now planning to diversify into Used Cooking Oil and a corn oil residue from corn ethanol refineries.

Report author Almuth Ernsting states: “So far, airlines have only been using small amounts of biofuels, and for those, they have been able to rely mainly on residues and waste as feedstocks. Yet the only – medium-sized – refinery that produces aviation biofuels today is already running out of tallow and therefore ha to resort to lower-quality wastes and residues which are in even shorter supply. To scale up their use of biofuels, airlines will have no choice but to resort to palm oil, and this would be disastrous for the climate, for forests, and for forest-dependent communities.”

A previous Biofuelwatch report, published in January, showed that Neste, who heavily rely on palm oil, expect to overtake WorldEnergy as the world’s biggest aviation biofuel producer this year. [6]

Biofuelwatch has calculated that using all tallow worldwide for biofuels could only supply 1.7% of global aviation fuel burned in 2016. Converting all Used Cooking Oil that can be realistically collected in the EU and USA would meet just 0.16% of US aviation fuel and 0,26% of EU aviation fuel use respectively. The total amount of the corn oil residue is even smaller than that of Used Cooking Oil. Furthermore, diverting more than the most contaminated types of tallow from animal feed, soap production and food results in greater palm oil use as a replacement. Diverting corn oil residue from animal feed to biofuels, leads to more soya oil being fed to cattle, and thus greater emissions from land use change.

[2] Biofuelwatch is a UK/US NGO which carries out research, advocacy and campaigning in relation to the impacts of large-scale bioenergy. See: biofuelwatch.org.uk

[3] The ICAO is a specialist UN organisation. Its Committee on Aviation Environmental Protection (CAEP) is meeting in Montreal from 4th to 15th February. The agenda for the CAEP meeting includes finalising recommendations about which types of aviation biofuels will be classified as ‘low-carbon’ ‘sustainable alternative aviation biofuels’ (icao.int/environmental-protection/Pages/CAEP11.aspx). CAEP, like other ICAO meetings are highly secretive and non-transparent (see eyeonglobaltransparency.net/2019/02/01/no-documents-closed-doors-at-the-international-civil-aviation-organization/).

[4] Note that the only proven and mature technology for making aviation biofuels that exists at present is Hydrotreatment of vegetable oils and animal fats, i.e. cannot use any feedstocks other than those which are commonly used to make biodiesel, too. See: biofuelwatch.org.uk/2017/aviation-biofuels/

[5] WorldEnergy (worldenergy.net/) is a US biofuel company which acquired the Paramount refinery from AltAir in March 2018. The refinery produces biofuels both for aircraft and for road transport.