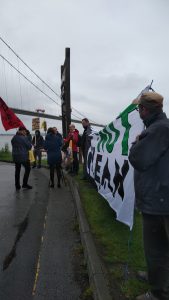 Hull, 14th June 2019 – Last night, environmental campaigners greeted attendees of the 2019 Humber Renewables Awards ceremony [1] in Hessle, Hull with a banner protest against the presentation of one of the awards to Drax Plc, owners of the UK’s single biggest power station and CO2 emitter.

Activists from Biofuelwatch, Extinction Rebellion York and Hull, Friends of the Earth Hull, and the Hull and East Riding and Doncaster Green Party denounced the choice of Drax Plc for a prestigious renewable energy award as greenwashing, undermining the purpose such awards, which is to recognise and support the UK’s transition to low-carbon renewable energy.

Last year, Drax Power Station, near Selby, burned 2 million tonnes of coal and pellets made from over 14 million tonnes of wood, far more than the UK produces annually. [2] Almost all of Drax’s pellets were imported, mostly from the southern USA, Canada and the Baltic States. Drax’s single biggest pellet supplier is Enviva. Environmental NGOs and investigative reporters in the USA have shown that Enviva sources a large proportion of its pellets from the clearcutting of coastal hardwood forests,[33] which lie at the heart of a global biodiversity hotspot.

Rita Frost from Dogwood Alliance, an NGO that works to protect the biodiverse forests of the southern USA, states: “Drax continues to protect its most controversial supplier, Enviva, that is harming forests & communities of the Southern U.S., and our climate. Does that sound like a company that should be rewarded for its sustainability practices?”

Mike Lammimam, co-ordinator of the Hull and East Riding Green Party, adds: “We are disappointed that Drax has been nominated for a Humber Renewables Award. Their power station is reliant upon the clearcutting and the associated destruction of ecosystems in large parts of the Southeastern USA for the wood pellets it burns. This is neither green nor clean, and it is exacerbating climate change. These are certainly not any credentials for an award.”

Drax is furthermore planning to replace its two coal units – which will have to shut down by 2025 under the Government’s coal phaseout policy – with even larger gas units. According to Almuth Ernsting from Biofuelwatch, “not only is Drax contributing to the destruction of forest ecosystems which play a vital role in stabilising the climate, but it is also seeking to lock the UK into decades of more fossil fuel burning. Drax would be suitable contender for a dirty energy award, not for a renewables prize”.

Photos: Please email biofuelwatch@gmail.com for photos from the protest.