x
by Almuth
on January 9, 2019
under Press Releases
∞ Permalink 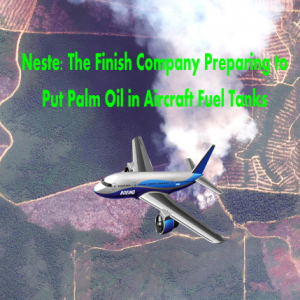 9th January 2019 – A report published by the environmental NGO Biofuelwatch [1] reveals that the Finnish biofuel and oil company Neste, which expects to become the world’s biggest producer of aviation biofuels in 2019 [2], relies heavily on palm oil, a leading cause of rainforest destruction, and still cannot guarantee that its palm oil is not sourced from illegal plantations inside a national park.

Neste is investing €1.4 billion in new biofuel capacity in its Singapore refinery, which the company plans to turn into a hub for aviation biofuel production [3]. The company, which is partly owned by the Finnish state, has entered into collaboration agreements with Air BP, Alaska Airlines,  and two US airports, and it is looking for more collaborations in Europe and beyond. Neste is already one of the world’s biggest producers of biofuels for road transport. In 2017, Neste used almost 700,000 tonnes of crude palm oil as well as an undisclosed amount of crude palm oil which the company claims to be ‘wastes and residues’, contrary to legislation in several European countries.

Biofuelwatch’s report shows that the oil palm plantations and mills supplying Neste are concentrated in Indonesian and Malaysian provinces with particularly high deforestation rates linked to palm oil. Although Neste Oil claims that all of its crude palm oil is traceable to plantations which meet its sustainability standards, three separate investigations by WWF and several Indonesian NGOs between 2011 and 2017 showed Neste sourcing from a palm oil mill which was supplied from an illegal plantation inside the Tesso Nilo National Park in Sumatra [4]. Furthermore, Neste’s sustainability standards take no account of indirect land use change which, as a report written for the European Commission shows, make palm oil three times as bad for the climate as the fossil fuels it replaces [5].

Report author Almuth Ernsting states: “Neste’s investment in Singapore confirms our fears that aviation biofuels will rely on palm oil and therefore worsen deforestation and climate change. Far from guaranteeing transparency and sustainability, Neste continues to keep the amount of palm oil in its fuel a secret, it continues to source from regions with rampant rainforest destruction for palm oil, and it cannot even guarantee to keep palm oil from illegal plantations in a national park out of its supply chain.”