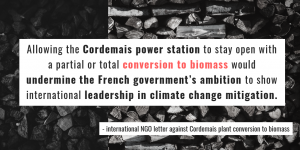 Paris, 28th February 2019 – An Open Letter by 46 environmental NGOs and networks from 19 countries (1) is being delivered to French Environment Minister, François de Rugy today, urging the government to rule out permission to convert Cordemais power station or any other coal plant to biomass and to ensure that France’s four coal power stations are shut down no later than 2021. Signatories include Friends of the Earth International, the Global Forest Coalition, European Environment Bureau, and organisations from three of the world’s largest wood pellet producing countries. The groups warn that EDF’s biomass conversion proposals are not compatible with the French government’s commitment to meet the goal of the Paris Climate Agreement, which is to keep global warming to within 1.5 degrees. EDF proposes to convert Cordemais power station to burning mostly wood pellets alongside coal, which runs counter to the government’s previous announcement to end all coal burning by the end of 2021.

The Open Letter is being published ahead of a report by the French grid operator RTE into energy security across Western France. The signatories believe that energy security concerns must be addressed through greater investments in energy efficiency, as well as in wind and solar power, not by locking France into more years of high-carbon electricity generation.

The signatories emphasise that voiding the worst impacts of climate change requires rapidly phasing out fossil fuel burning without resorting to other high-carbon, polluting forms of energy, such as electricity from forest biomass.

EDF proposed to burn a special type of pellets made from waste wood in Cordemais and possibly Le Havre, however those claims have been debunked in a report published by the UK/US NGO Biofuelwatch (2).

Almuth Ernsting, author of the report, states: “EDF is speaking about producing steam-exploded pellets to burn in Cordemais. Such pellets have so far been burned in just one coal power station worldwide, in Canada, where they caused rapid corrosion, which could have put workers’ safety at serious risk of explosion had the plant not be shut down in time. EDF must know that this cannot work and that they would have to resort to normal pellets made from virgin wood.” (3)

Katja Garson from Fern, one of the groups that initiated the Open Letter, adds: “To convert Cordemais power station to biomass, EDF will almost certainly have to import large quantities of wood pellets from regions such as the southern US, where pellet companies are sourcing from the clearcutting of highly biodiverse coastal hardwood forests and from forest conversion to sterile monoculture tree plantations – or from countries such as Estonia, where forests are being cleared much faster than they can regrow, causing irreversible losses to wildlife and reducing communities’ quality of life.” (4)

As the Open Letter points out, the concept that burning forest biomass is inherently carbon neutral or low carbon has been debunked by hundreds of scientists. (5)

(1) The Open Letter is available at fern.org/news-resources/open-letter-to-the-government-of-france-to-protect-forests-communities-and-the-climate-the-conversion-of-cordemais-power-plant-to-biomass-co-firing-must-not-go-ahead-900/

(3) Steam exploded wood pellets made from virgin wood (which is less corrosive than chemically treated waste wood) were burned at the converted Thunderbay power station in Ontario. Once converted, the plant operated at just 2% of its capacity, generating electricity at 25 times the cost of other biomass power plants ( tvo.org//article/current-affairs/why-arent-northwestern-ontarios-state-of-the-art-energy-facilities-producing-any-energy). It was then shut down due to severe corrosion (cbc.ca/news/canada/thunder-bay/thunder-bay-gs-close-1.4764057). Corrosion can cause explosions in power stations.

(4) For background information about the impact of the pellet industry in the southern US, the world’s biggest pellet producing region, see dogwoodalliance.org/wp-content/uploads/2017/05/NRDC_2014-2017Booklet_DigitalVersion-resize.pdf and reports.climatecentral.org/pulp-fiction/2/ . For background information about unsustainable logging practices in Estonia, see climatechangenews.com/2018/01/16/logging-surge-threatens-quarter-estonias-forest-warn-conservationists/ and news.mongabay.com/2017/10/estonias-trees-valued-resource-or-squandered-second-chance/