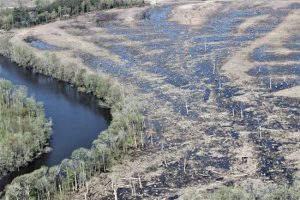 The UK government’s continued support for burning trees for electricity – so-called “biomass” – threatens a net zero emissions goal. Moreover, while the Committee on Climate Change (CCC) has rightly challenged the government to go further and faster in fighting climate change, its reliance on biomass with carbon capture and storage (BECCS) to get there is misguided and risks driving even more tree burning in the UK, with enormous climate and ecological risks. The Natural Resources Defense Council and its partners at Biofuelwatch, Dogwood Alliance, and the Southern Environmental Law Center urge the UK government to put an immediate end to biomass electricity subsidies and channel investment into energy efficiency and conservation, genuinely zero-emission renewable energy like wind, wave, and solar power, and smart resources, such as electricity storage.

“Biomass-burning at a massive scale in the UK today is a clear and present threat to any last gasp we have of avoiding the worst consequences of climate change. The UK needs to reverse course and end its multi-billion pound subsidy programme for wood-fired electricity generation now if the country is going to help the world avoid devastating planetary warming,” said Sasha Stashwick, Senior Advocate at the Natural Resources Defense Council.

Almuth Ernsting from Biofuelwatch adds: “The Committee for Climate Change’s endorsement of BECCS is badly misguided. If BECCS was to ever work, it would suck up billions of subsidies urgently needed for true climate solutions, and lead to yet more trees being burned for less energy.”

The CCC has acknowledged that biomass must not be considered as carbon neutral but can result in carbon emissions comparable to those from fossil fuels. UK legislation only accounts for a sliver of the full lifecycle impacts of biopower plants.

“The CCC warned in a report last autumn that without significant reforms, reliance on large-scale biopower may lead to worse outcomes for the climate than using fossil fuels – a critical admission from the UK government’s official climate advisory board,” said David Carr, General Counsel at the Southern Environmental Law Center. “As long as Drax and others continue to burn trees, their power stations cannot be considered green, with or without carbon capture technology added on.”

The CCC has rightly underscored the risks associated with biomass imports, such as from forests in the US Southeast where NGOs have documented that biomass harvesting to supply the UK energy market is contributing to the destruction of ecologically valuable bottomland hardwood forests.

“Year after year, our on-the-ground investigations expose the damaging logging practices used to source the biomass industry, driven in a large part by misguided UK policies,” said Rita Frost, Campaigns Director at Dogwood Alliance. “If the UK is serious about leading on climate change, it must cut emissions, not forests.”

Recently, the UK hit a new record for powering the country without coal, achieving a total of 90 hours and 45 minutes. Worryingly, 4 percent of this record power generation came from biomass and an increasing share of the UK’s ‘renewable’ energy generation currently comes from biopower plants – such as Drax – which burn biomass, primarily in the form of wood pellets imported from the Southeastern US. This generates climate pollution both at the smokestack, where burning biomass results in more carbon than burning coal, and from the land, where increased wood harvesting replaces mature forests with young saplings, reducing forest ‘carbon sinks’ and foregoing sequestration.

The Natural Resources Defense Council (NRDC) is an international nonprofit environmental organisation with more than 3 million members and online activists. Since 1970, our lawyers, scientists, and other environmental specialists have worked to protect the world’s natural resources, public health, and the environment. NRDC has offices in New York City, Washington, D.C., Los Angeles, San Francisco, Chicago, Bozeman, MT, and Beijing. Visit us at www.nrdc.org and follow us on Twitter @NRDC.

Biofuelwatch is a UK/US NGO which carries out research, advocacy and campaigning in relation to the impacts of large-scale bioenergy. See: biofuelwatch.org.uk

For more than 30 years, the Southern Environmental Law Center has used the power of the law to champion the environment of the Southeast. With more than 80 attorneys and nine offices across the region, SELC is widely recognized as the Southeast’s foremost environmental organization and regional leader. SELC works on a full range of environmental issues to protect our natural resources and the health and well-being of all the people in our region. www.SouthernEnvironment.org

For over 20 years, Dogwood Alliance has worked with diverse communities, partner organizations and decision-makers to protect Southern forests across 14 states. We do this through community and grassroots organizing, holding corporations and governments accountable and working to conserve millions of acres of Southern forests. www.dogwoodalliance.org and follow us on Twitter @DogwoodAlliance