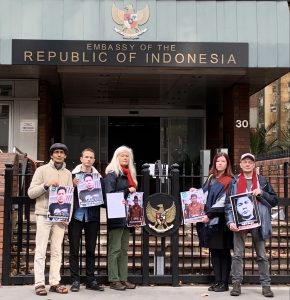 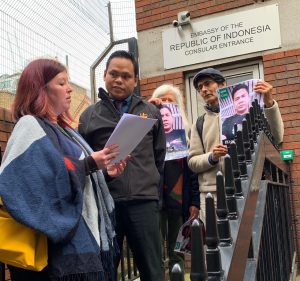 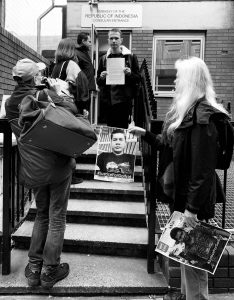 London, 31st October 2019 – In solidarity with Indonesian colleagues[1], Biofuelwatch has joined civil society groups around the world to call on the Indonesian government to launch a thorough and transparent investigation of the suspicious death of human rights defender, Golfrid Siregar. The groups are endorsing an international call on the Indonesian government to urgently protect its human rights defenders. Today, on October 31, 2019, Biofuelwatch are participating in an international action in delivering the shared concerns of over 200 civil society groups on this issue to Indonesian Embassies around the world. Groups across Asia, Latin America, Europe, Africa, and others will personally deliver this collective letter of solidarity and concern to Indonesian Embassies. Biofuelwatch joined other groups in delivering the letter to the Indonesian Embassy in London.

On October 6, 2019, Golfrid Siregar died under extremely suspicious circumstances in North Sumatra, Indonesia. A long time environmental human rights defender, Siregar was found beaten and abandoned on the side of the road a few days earlier. Although local Indonesian police have concluded his death was the result of a traffic accident, the circumstances of his death raise questions. For instance, his injuries did not reflect those of being in a fatal crash or accident – his clothes and body showed no scrapes or tears, and his motorcycle was relatively undamaged. Siregar’s body was found with soil and dirt, even though the area in which he was found was paved. No bloodstains were found in the area either.

As an environmental lawyer, Siregar worked with the Indonesian Forum for Environment (WALHI) on a number of high profile and controversial environmental lawsuits in North Sumatra, including sand mining, palm oil plantations, and other projects opposed by local communities. Recently, he was involved in the Batang Toru Dam project, which if built, would dispossess local communities of their livelihoods and most likely doom an entire orangutan species to extinction. Significantly, he had been involved in demonstrating a major forgery in the environmental impact assessment in the Batang Toru case, and had recently raised concerns about potentially illegal activities of local North Sumatran police in regards to their management of criminal investigations related to the case.

There is an increasing trend of harassment and criminalization of human rights defenders around the world, including Indonesia. Siregar’s death is a tragic example that human rights defenders in Indonesia are facing ongoing threats and intimidation for their efforts to protect Indonesia’s environment and its people. In the face of such injustice and danger, we refuse to stay silent. The Indonesian government should take urgent, immediate steps to protect human rights defenders. We believe that they are their country’s best and brightest, putting their lives on the line in the hopes of making their home more safe and more just.