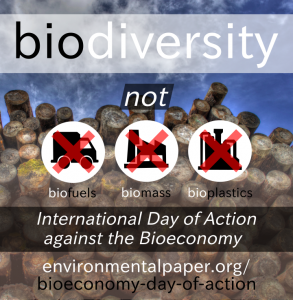 (November 7, 2018) – An international coalition of more than 120 organisations from 40 countries today warns that the rapid global growth of the so-called bioeconomy poses a grave risk to the climate, nature, and human rights.

In addition to publishing an Open Letter [1], a petition [2] is being launched today to coincide with the International Day of Action on Bioenergy which calls on governments around the world to support proven low carbon technologies, reduce overconsumption, and protect forests and other
ecosystems.

In recent years, governments from the UK to Brazil to South Korea have promoted burning forest biomass for energy as a substitute for fossil fuels. Yet a large and growing number of scientific studies show that, far from being the ‘green energy’ climate solution, burning biomass
for energy emits no less carbon than burning coal, while also threatening biodiversity, and human rights.

The petition and global day of action come as the bioenergy industry is striving for further expansion and influence. Today, major figures from the industry and policymakers will gather in San Francisco for an event organised by the BioFuture Platform [3] , an initiative supported by 20 countries and backed by organisations including the International Energy Agency (IEA) and the Food and Agricultural Organization of the United Nations (FAO). The Biofuture Platform promotes products made out of bio-materials as well as the wider bioeconomy.

“The BioFuture Platform actively promotes bioenergy and biomass products, which incentivises more forest destruction. In the Southern US, we are already facing the insatiable appetite of European demand for biomass thanks to well-intentioned policies that have had damaging results. The bioeconomy harms our precious forests, rural communities, and the climate. In the wake of the latest UN IPCC report, it’s clear that forests are our best defense against climate change and we need to keep them standing,” said Rita Frost, campaign manager of Dogwood Alliance, which works to protect the Southern forests of the US.

“Over the past year, reports of an up to 60% decline in animal populations worldwide and an 80% decline in insect populations in several regions have made the headlines, with habitat loss remaining the number one cause of biodiversity loss. Yet the Biofuture Platform and numerous governments are promoting policies which will accelerate habitat loss in favour of vastly more crop and tree monocultures for energy and materials,” said Almuth Ernsting, co-director of Biofuelwatch , which campaigns on the impacts of large-scale bioenergy and bio-based
products.

“The exponential growth of the bioeconomy is a global threat. Instead of contributing to climate mitigation, bioenergy and ‘bio’ products keep energy generation locked-in to the carbon cycle, decrease the amount of land available for food crops, drive land-grabs, and decimate forests – our most efficient carbon sinks. For a sustainable world, we must protect forests and rely on truly renewable energy sources, such as wind and solar,” said Katja Garson, bioenergy campaigner at forests and rights NGO Fern .

“Demand for biofuels, woodchips, pellets, and charcoal is a major driver of forest destruction and land-grabbing across the global South. Realising the plans of the Biofuture Platform would require tens or even hundreds of millions of hectares of new plantations at a devastating cost to forests, indigenous peoples, other forest dependent and traditional communities, and small farmers” said Mary Louise Malig, Campaigns Coordinator of the Global Forest Coalition, based in Bolivia.

Civil society organizations call for an end to support for bioenergy and other short-lived bioproducts. In the era needing urgent action on climate change, the NGOs call for “meaningful and equitable responses to the climate crisis which respect human rights, focus on proven low-carbon technologies, reduce overconsumption and waste, and protect forests and other ecosystems.”

[1] For an online version, see: environmentalpaper.org/bioeconomy-day-of-action . The letter will also be
delivered to policymakers at the BioFuture Platform Conference being held in San Francisco, California