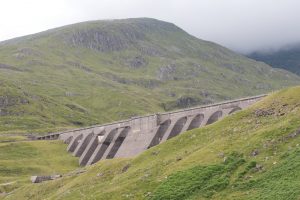 21st December 2018 – With Drax shareholders set to approve the acquisition of ScottishPower’s hydro and fossil fuel gas assets today, Biofuelwatch [1] warns that the sale will boost high-carbon, dirty energy at the expense of future electricity storage and thus wind power expansion. According to Biofuelwatch, the takeover will likely spell the end for Scottish Government hopes to expand Scotland’s biggest pumped storage facility, which is vital for a transition towards clean renewable electricity [2].

ScottishPower is rebranding itself as providing “100% Green Generation” following the sale of all its non-wind electricity generation capacity to Drax [3], yet included in that sale is an important part of Scotland’s hydro power infrastructure: two hydro power schemes, in Galloway and Lanarkshire, and Scotland’s largest pumped storage plant, Cruachan. Pumped storage is the longest-established form of storing electricity. The Scottish Government has classified an increase in pumped storage capacity at Cruachan as a ‘national development’ and the most advanced plan for expanding pumped storage across Scotland [4].

Biofuelwatch believes that Drax is highly unlikely to invest in expanding Cruachan because it is heavily committed to burning fossil fuels and imported wood, and because it accrued net losses during 2017 and the first half of 2018 [5].

Almuth Ernsting from Biofuelwatch states: “Selling gas and hydro assets to a company that is wedded to dirty, high carbon energy does not make ScottishPower a greener company. It is a cynical, profit-driven move which could undermine the very expansion of wind power to which ScottishPower claims to be committed.”

Drax’s Yorkshire power station is the UK’s single biggest emitter of CO2 [6] as the country’s number one coal burner, and the world’s biggest burner of biomass. It has been widely denounced by environmental campaigners worldwide for burning millions of tonnes of wood pellets from North America, many of them sourced from the clearcutting of highly biodiverse coastal hardwood forests in the southern US [5]. Furthermore, Drax has applied for planning permission to build the UK’s largest ever gas power station in order to replace its coal units which are required to close in 2025 under Government policy.

Frances Howe from Biofuelwatch adds: “If ScottishPower had wanted to help address climate change, it would have shut down, not sold its gas power stations and invested in more pumped hydro storage. It would not have made this deal with one of the country’s dirtiest energy companies.”

[1] Biofuelwatch is a non-profit organisation campaigning against large-scale industrial bioenergy and for energy policies which focus all support on genuinely low-carbon renewable energy, energy efficiency and energy conservation (biofuelwatch.org.uk/)

[2] Electricity storage is vital for large-scale use of wind power, which has a variable output, dependent on the weather. Pumped hydro storage involves using excess wind energy to pump water up a hill and then releasing it when wind speeds are low.