Scores of demonstrators took to the streets on April 20th 2016 to demand an end to subsidies for Drax power station, during the Drax PLC Annual General Meeting in the City of London.

Dinosaur Tec is Not Clean Tec 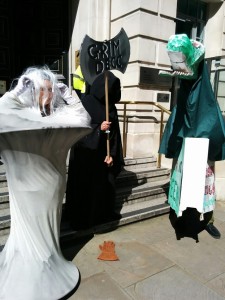 Biofuelwatch has a long and proud tradition of protesting outside the AGM, drawing attention to the damage and destruction caused by Drax.  We continue to let  investors know that Drax is toxic, destructive energy and that investments in Drax are not safe. In return for destroying climate, forest & community Drax receives subsidies of around £1.3 million a day. 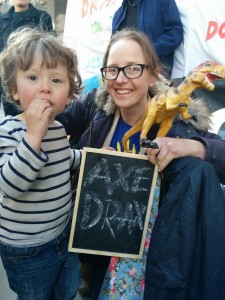 We gathered en masse – appreciating campaign solidarity from London Mining Network, Coal Action Network, Reclaim the Power, Care2, Campaign Against Climate Change, Rising Tide and more.   We donned fabulous costumes, hoisted our placards, banners and signs and positioned ourselves so we could engage shareholders as they entered the conference room.  Leafleting was fast, furious & highly effective.  Attendees and passers-by were handed a “Warning to Investors”.

Meanwhile, Drax power station was visited by members of People & Planet in a solidarity action. 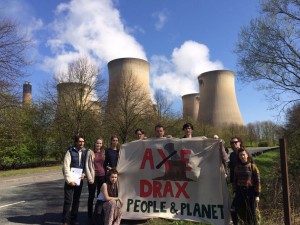 Demonstrators generated a friendly vibrant atmosphere and delivered our message with inspiring speakers and protest music.

Photographer Jo Syz captured the AGM demo action energy of the day in these photos. 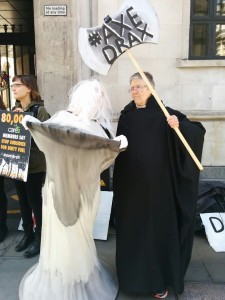 As the AGM drew to a close the demonstration progressed to the Department of Energy and Climate Change where we delivered a petition (hosted by Care2.com), which has attracted a total of over 130,000 signatures.  The grim reaper symbolically axed the Draxosaurus. 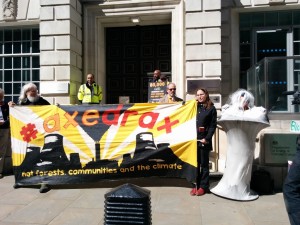 For Forests, Communities & Climate It’s time to #AxeDrax –  the UK’s largest carbon polluter has got to go!  Find out more about our campaign and get in touch if you would like to support axing the Draxosaurus. 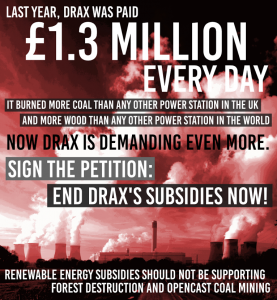 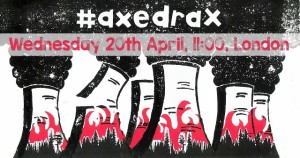 Would you like to know more about Drax?
To find out more about why Biofuelwatch intend to AxeDrax: not forests, communities, or the climate, visit our #AxeDrax campaign page.

This video – Biomass Emergency is a great way to find out more about biomass electricity. 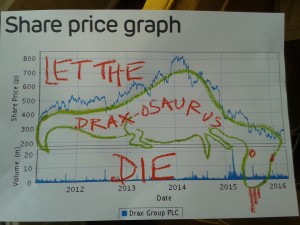